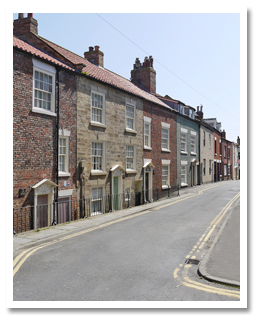 Whitby is a picturesque fishing town on the coast of North Yorkshire, England, UK. Our holiday cottage is in the heart of Whitby on a narrow, quiet street on the west side of the harbour. It enjoys stunning views across the harbour to the abbey, and is within close walking distance of shops and the beach.

Getting there and away

Travelling up from the South, Whitby can be reached from the A1 by taking the A64 past York in the direction of Scarborough, then the A169 from Malton to Pickering and over the North Yorks Moors.

From the North, cross from the A1 to the A19. Going through Middlesbrough take the A174, then turn off to the A171 through Guisborough and over the North Yorks Moors to Whitby.

Parking spaces can be found on the streets nearby, and we provide parking permits for the local parking zone. Please note that there is no off-road parking at 37 Cliff Street and Cliff Street itself is no parking (except for loading and unloading).

By train and bus

Whitby is at the end of the Esk Valley train line, which runs from Middlesbrough to Whitby. From the East Coast Mainline, change at York or Darlington to Middlesbrough and then to the Esk Valley line. The Esk Valley line itself is beautiful, running through the North York Moors national park, and if you have the time this journey is worth taking for its own sake, but this route is not the quickest.

Instead you may also want to consider taking the train to Scarborough (change from the East Coast Mainline at York) and then the bus to Whitby (bus X93, timetable) which leaves from outside the station.

Details of train routes and timetables can be found at National Rail Enquiries.

Details of regional buses to Whitby from York, Middlesbrough, Scarborough and elsewhere can be found on the North Yorkshire County Council website.